Black Hair History: Black Hairstyles and Where They Came From

For centuries, our hair has been a way to express ourselves, our culture, and our creativity. Our history, or perhaps our hair-story, can be dated back in times where the common "Press and Curl" was just as popular as a "Wash and Go." From different styles such as the sew-ins and various products and innovative tools, Black women have made strides for the haircare industry and their communities. In honor of Black History Month, we are exploring Black hairstyles, where they came from, and how it has made an impact. As we continue to set the bar for hair creativity, we hope to see more appreciation from society rather than appropriation. While our hair symbolizes our innovation and spirit, it's a constant reminder of how we have come as Black women.

We wouldn't have a lot of what we do today in the world of hair if it wasn't for the Queen of entrepreneurialism herself. Born Sarah Breedlove in 1967, Madam C.J. Walker was like many African American women at the time and was in constant search for quality hair solutions that met the needs of curls and coils alike. With limited options available for Black women, it was difficult to treat hair that had texture. When she became fed up with the lack of products made for Black hair, she took matters into her own hands and formulated products from scratch. After selling door to door with the help of her husband and daughter, Madam C.J. Walker expanded her clientele, and it grew into the birth of the Madam C.J. Walker Manufacturing Company. This was the first company to introduce a haircare system that contained everything a woman needed to manage her crown accordingly.

The "Walker System" included a scalp preparation of shampoo, a pomade for moisture, and hot iron for styling. While this wasn't your typical l.o.c routine, it was a method that provided Black women with beautiful, strong hair that they adored. A true wizard in the business realm, Madam C.J. Walker's brand was excelling in all areas and even formed partnerships with local drug stores. At the height of her career in 1919, she was considered the wealthiest self-made woman in the country. Even after her death, products continued to succeed around the country and even in neighboring countries such as Cuba, Jamaica, Panama, and Costa Rica. While her daughter A'lelia continued running the business, her mother, C.J. Walker, was undoubtedly an inspiration for people to start their own businesses and create solutions for Black women in haircare.

As the Black community continued their fight in society, men and women began embracing a natural look that symbolized African Americans from root to tip. The Civil Rights Movement brought the rise of the natural movement as well and encouraged men and women in the 1960s and '70s to accept their coils and curls and move away from any manipulations. Following their message of Black Power, the European standards did not align with their mission. Impactful statements from popular icons like Angela Davis and Diana Ross were made not only made from what they said but by saying them in their afro hairstyles. Men such as Jimi Hendrix were also making an influence towards natural hair in the form of activism. Unfortunately, these hairstyles faced backlash for decades to come and were often deemed unprofessional. It would be many years later before laws were passed to prevent people from discriminating against Black women and men for their hair. Still, this movement made an important impact on the community and provided a look that swept the disco generation.

The history of wigs can date back to Ancient Egypt, where Egyptians shaved their heads to alleviate excessive heat from the desert sun. In order to keep up appearances, women would use wigs. Although the wigs would vary from different classes, it was very common for everyone to wear them. While the Black women's relationship with wigs began in Egypt, it certainly has evolved and has since been embraced in the industry to create fun, new looks. The versatility has enabled Black women to change up their styles and protect their natural hair simultaneously.

As an even deeper way to show love and respect to our natural hair, wigs have provided a way to showcase the African American culture without having to spend excessive time on one style. These days, wigs can range from curly to coily, and some would even be braided or in locs. It's a statement that announces Black beauty in a multifaceted approach that makes Black women feel even more confident.

After various decades of different hair trends, the hair industry was evolving to new heights but still not quite what we see today. While Black women took to the streets to mobilize against discrimination, hairstyles that could be manipulated into various looks were very popular. With additions such as curls and wigs being incorporated, there still wasn't a technique that included both natural hair and synthetic tracks. An avid experimentalist when it came to hair, Christina Jenkins landed on something truly unique when she developed a way to attach both synthetic hair and the natural hair together for a transformational style.

This outstanding technique allowed women, especially Black women, to manipulate their hair freely and enjoy multiple looks. The concept of interweaving different hair together for one hairstyle was the ultimate game-changing in hair history, and in May of 1951, the 'Hair-Weeve' filed for her intention to be patented. After her initial success, Jenkins began teaching her methods to stylists and even opened her own store, the HairWeeve Penthouse Salon. Jenkins's hair weaving technique swept the hair world and continues to be a prominent demand, even becoming its own hair extension industry. As a significant contributor to Black hair, Christina Jenkins helped to catapult the trajectory for the Black community when it comes to hair trends for generations to come.

The history of braids started off as a sign of marital status, age, religion, wealth, and more within West African cultures. The oldest image of a woman with braids was even discovered along the Nile River. As a connection to their creator and ancestors on earth, braids continued to be a style that was used in Black culture for a generation. While the evolution of braids has changed in terms of expression, the pattern has stayed the same. Compared to other hairstyles, braiding is more of an artistic technique that has a unique form and requires skill and talent. It's also specifically meant for textured hair.

Although these hairstyles were subjected to harsh criticism, it didn't stop non-black groups from adopting them as their own, often showing a lack of understanding for the rich history of braids, curls, and locs. When T.V Personality Kim Kardashian wore cornrows in 2018, she narrowly made reference to a hairstyle worn by a white actress in a 1979 film. Men and women outside the black community were praised for their new and trendy looks, which, unknowingly or not, appropriated black culture. By honoring Black women in the hair industry, society should allow women to not only choose their outlets but celebrate in every facet. From long straight wigs to coily, fros, and natural curls, Black women deserve to be celebrated for unraveled innovation and creativity. Sip this tea with us!

Connect with us to learn more and to make sure you know about exclusive product deals as soon as they happen!

Join us and get nice things

*By completing this form you're signing up to receive our emails and can unsubscribe at any time.

Let customers speak for us

I probably have 10 plus bonnets from local beauty supply stores. My main problem was imghey would always come off in the middle of the night or they were too tight. Now the 1st night I slept in my Glow by Daye bonnet, I was sold!!! It’s definitely worth every penny, it’s pretty, soft and service was fast. Thank you for this great product!

I’ve never owned a bonnet that feels this good. The fit is perfect and I colors are vibrant. I’m sure I’ll be purchasing more. 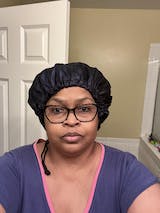 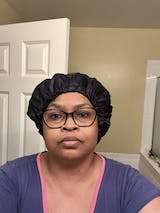 It works, it's adjustable, and it's still on my head after sleeping all night. My only problem is that I need more than one

Fits nicely and the draw cord is the bomb!!